Breivik Would Do it Again 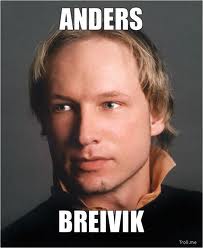 Anders Breivik the anti-Islamic self-styled militant who is on trial for the murder of 77 people testified for the first time yesterday. On trial for the worst peacetime atrocity in Norway’s history, Breivik described his killings as the most spectacular political act since WWII. He also declared he would do it again if he were allowed.

He spoke only after judges allowed him to read his 13-page statement that a number of Norwegians worried was nothing more than his manifesto propagating xenophobia and his far-right opinions.

Previous to his testimony, judges ruled it would not be broadcast live on television but could be witnessed in the courtroom by the public, including journalists. His testimony, the first day of five allocated to him, offered those in the courtroom an opportunity to hear the unsettling, tangled and often times contradictory reasons he had taken from the attacks. He gave a clench-fisted salute as he entered the courtroom on his trial’s second day.

Breivik told the courtroom he did not regret his actions, which he said were carried out for goodness, not evil. He said that Norway was used as a dumping area for surplus births, seemingly a reference to the immigrants Norway allows in from countries of different ethnic and racial backgrounds. He testified that at one time, he had been attacked by a gang of Muslims and had his nose broken. His allegation had no evidence to support it.

He told listeners that the catalyst for his radicalization was the Balkans war of the 1990s. He scales were tipped at that time. He apparently was a Serbia supporter, which was seen by many as the aggressor in the war.

His statement also included many abusive allegations towards evil forces such as cultural Marxism and liberalism. He said his violent actions could have been prevented if not for the Labor Party’s inclusive, liberal ideology.