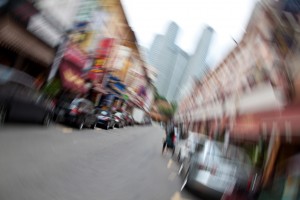 A team from Imperial College London said that early trials using 20 people suggested the method of using electricity stimulation of the brain could ease motion sickness symptoms similar to the effect that drugs have but without any drowsiness.

The electrical current is able to interfere with messages arriving from part of the ear that controls a person’s balance.

Other scientists have urged a healthy skepticism of the study until a larger trial can back the findings.

Whether traveling by car, boat or plane motion sickness results from mixed messages that come from the ears and eyes. It leaves the brain in a state of confusion about what is taking place which culminates in headaches and nausea.

Scientists said people did not have motion sickness if their inner ear had been damaged.

Therefore the team used an electrical stimulation in an attempt to manipulate the area of the brain that interprets the messages that come from those organs that balance the body in the ear while people were made to feel nauseous.

Twenty volunteers sat in a chunder chair which twists like a ride at the fair and spins around at a certain angle.

It will make nearly anyone become sick with a few minutes. If continued a person becomes physically sick.

Then an hour after that half of the people were given a slight electrical shock that passed through their scalp to alter the activity of the brain.

The other half received a dummy treatment.

With the electrical stimulation, it took another 207 seconds for the motion sickness to develop.

Those given the dummy treatment felt nauseous only 57 seconds after the movement started.

No known side effects exist from the brain stimulation and this would be easy to develop into something used on a regular basis.

The lack of side effects is what interests the researchers since drugs normally cause drowsiness which can affect the ability of people to function properly.