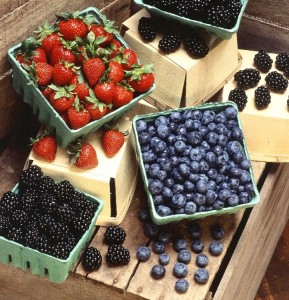 Eating extra fruit, in particular blueberries, grapes and apples has been linked to a lower risk for the development of type-2 diabetes, suggest a just concluded study.

Blueberries lower the risk 26% compared to just 2% for three servings of any other whole fruit, but fresh fruit juice didn’t appear as if it had the same effect.

Diets were looked at by researchers of over 187,000 people, living in the U.S. Researchers from the U.S., the UK and Singapore searched through the data from three studies of health professionals and nurses in the U.S. to research a link between consumption of fruit and the risk of developing type-2 diabetes.

The disorder is incurable and is characterized by the body not being able to control the levels of blood sugar, because of problems dealing with insulin, a hormone.

In those with type-2 diabetes, either the cells in the pancreas do not make sufficient amounts of insulin, or the cells in the body do not react to insulin properly, which is referred to as insulin resistance.

Food frequency forms were used in the studies to follow up with all participants in four-year increments. The questions asked how often they ate a portion of each different fruit on average.

The analysis by researchers of the information showed that a weekly consumption of three servings of grapes, raisins, apples, pears, and blueberries significantly lowered the risk of contracting type-2 diabetes.

All fruit was shown to lower the risk, but these fruits in particular appeared to be more effective.

One reason for this said researchers could be that these fruits are high in anthocyanins, which have shown to enhance, in mice, glucose uptake.