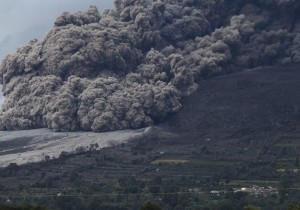 Fourteen people were killed, including 4 children on Saturday when they were engulfed in ash clouds that were scorching hot that had exploded from Mount Sinabung in its biggest eruption of late, said officials.

Searing dark clouds rolling down the sides of the mountain left the area draped in apocalyptic scenes of bodies covered in ash scattered along the roadside in the village of Sukameriah only 1.7 miles from the crater of the volcano.

Officials in Indonesia fear more fatalities could occur from the eruptions on Saturday, but because of the dangerous potential of deadly heat clouds spewing out of the mountain, a mission of search and rescue was grounded. One person with the disaster relief effort said he expected more victims but said they could not recover them due to them being in the path of the deadly ash clouds.

All of the 14 bodies were identified with four being students at a high school on a sightseeing tour of the volcano on Sumatra.

Three others – a father, his son and a man returning to the village to check on his home – were trapped and injured by the ash clouds. The three were at the intensive care unit in a nearby hospital.

Over 30,000 people had to be evacuated since eruptions started occurring in September. However, some nearby residents returned on Friday to their homes following advice from authorities that homes outside a radius of five kilometers from the volcano were safe.

On Saturday morning, the volcano erupted sending hot ash and rocks 6,500 feet into the air, blanketing the countryside surrounding the mountain with a grey dust.

The village of Sukameriah is located inside the red zone, where all human activity is banned, but often times locals trespass into the restricted area so they can check on their personal belongings inside their homes, as well as care for their crops.

Mount Sinabung is just one of the 129 active volcanoes that criss-cross Indonesia, as the country straddles a major tectonic fault line, referred to as the Pacific Ring of Fire.