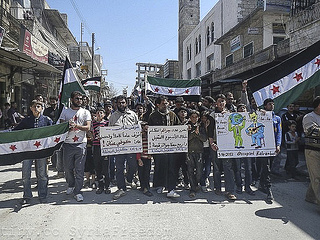 Early Wednesday, the IHH, the humanitarian aid agency of Turkey said that the government of Syria would be freeing up to 2,130 prisoners that were being kept by the rebels. The IHH head, Bulent Yidrim, was in the capital of Syria to help with the negotiations in the deal.

A Free Syria Army spokesperson confirmed the prisoner exchange and said it was negotiated through help from Qatar and Turkey. The Iranians were originally captured while in Damascus during August by the different rebel groups, who indicated the prisoners had been members of the Revolutionary Guard in Iran. Rebels made a video available that showed military identification cards from Iran that had been allegedly taken from the prisoners.

However, Iran denied that the prisoners from their country were from the Revolutionary Guard. Tehran said they were just pilgrims that had been in Syria visiting a Shia shrine.

The hostages were a major bargaining chop for the rebels, as one of the closest allies the Syrian government has is Iran.

The uprising first started in Syria back in March of 2011 and this is the first time a major exchange of prisoners has taken place since the uprising began.