Debby Soaking the State of Florida 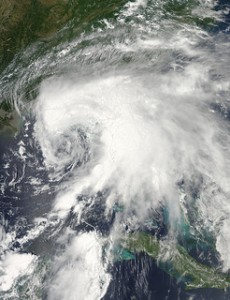 Tropical Storm Debby, stalled off the coast of Florida, was dumping rain on the state, causing widespread flooding, high winds and a threat of dangerous tornados. The storm is already responsible for the death of one person after tornadoes struck the central part of the state on Sunday.

Since Debby has come to a complete standstill in the northern part of the Gulf of Mexico, the heavy rain and winds could last for days said weather officials. On Monday morning, the storm was centered about 90 miles off the coast of Apalachicola, a town in the Florida Panhandle. The storm contained maximum winds of 50 mph. Tropical storm force winds, those that are at least 39 mph, extended over 200 miles from the storm’s center.

Little or no movement in the storm is expected to take place over the next few days, but the forecast was uncertain, said meteorologists. Debby should dump between 10 to 15 inches of rain in the eastern panhandle of Florida and in the northern parts of the state. Isolated amounts of rain could be as much as 25 inches.

Flash flooding will be exacerbated due to already wet soil conditions. A tropical storm warning was still in effect from east of the Alabama-Florida line to Suwanee River in Florida.

Tornadoes were possible during the day Monday across Florida’s eastern Panhandle, along with parts of central and western Florida. Until late Monday afternoon, a large area of Florida remained under a tornado watch. Numerous warnings and watches for flooding were posted throughout the area.