Walmart Smaller Stores Could be Answer to Growth Problems 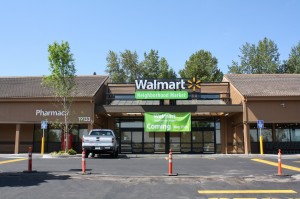 Only weeks after being named the new CEO of the largest retailer in the world, Doug McMillion held a meeting at Walmart with his top management and told them to read The Everything Store a book written by Jeff Bezos the founder of Amazon.com.

The homework assignment was a surprise since the company had long ago devised the most successful formula for retail and milked it last year for close to half a trillion dollars.

However, the price gap has shrunk between competitors and Walmart stores and the retailing behemoth is facing lower traffic and sales.

Walmart’s ROI fell to 17% for the year ending January 31, which was down for a high of 20% in 2006. The weaker than expected results, is what led to bonuses being the lowest for executives in a number of years.

The discount retailer has been dogged by bribery allegations overseas. It is also continuing to face challenges with regulators from its workforce that is nonunionized.

The retailer has stumbled in many countries in an attempt to expand internationally, even though it remains a dominate force in retailing in Canada and Mexico.

McMillion is just 47 and is the youngest Walmart CEO since Sam Walton the founder ran the business. Since he has taken the helm earlier in the year, executives at Walmart say McMillion has handed out urgent instructions for the acceleration of new concepts for new stores and new strategies for online in his attempt to win back a share of the market lost to Amazon and other fast expanding chains.

Even imagination and speed might not be sufficient to move the numbers meaningfully for the largest company in the U.S. measured by revenues.

For the company to see a sales growth of 1% during any year, it must pull in additional sales of close to $5 billion.

In 2014, the company will open more convenience type and smaller grocery stores than its supercenters of for the first time.

The Express and Neighborhood Market stores at between 10,000 and 40,000 sq. feet in size are just a fraction of a superstore in size.