US Manufacturing Goes Up as Orders Increase 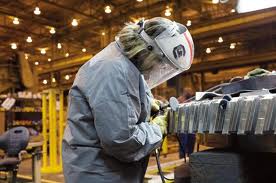 Manufacturing in the United States went up in June as orders increased. Factory reports from Japan to the United Kingdom indicated stabilization in the global economy. According to the Institute for Supply Management, US manufacturing increased to a three month high. The ISM index went up to 50.9 from 49 in May.

Shares increased across the globe as the data improved outlook for a global growth in the second half of 2013. There was a decline in China’s purchasing manager’s index that indicated a credit crisis in the second largest economy in the world that could be a risk to the global outlook.

The Standard & Poor’s 500 Index increased 0.5 percent to 1,614. The Stoxx Europe 600 Index as well as the Topix Index of Japan also gained during the day.

Japanese manufacturers were optimistic, which was the first time since September 2011. That showed confidence in Prime Minister Shinzo Abe’s reflationary policies even through the volatility of the stock market.

The quarterly Tankan index for large manufacturers increased to 4 in June from negative 8 in March. This was according to the Bank of Japan. A positive number shows optimists outnumber pessimists.

UK manufacturing increased at its fastest rate in two years. This added to the indicators that the recovery in the region is gaining momentum. A factory index increased to 52.5 in June from 51.5 in May.

In the Euro region, manufacturing declined less than previously estimated last month. This was one of the signs that the economy in the Euro zone is starting to emerge from its recession.

Real estate prices as well as the efforts to control financial speculations are limiting China’s economy. Two reports on Chinese manufacturing dropped in June. The Purchasing Managers’ Index dropped to 50.1, which is the lowest level in four months.

Next »
Antidepressant for Hot Flashes Approved by U.S. Regulators