To Help Merger AB InBev Selling Some Brands in Europe 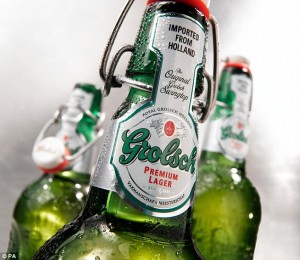 Anheuser-Busch InBev on Thursday said it was planning to sell several of the premium brands of SABMIller in Europe including Grolsch and Peroni, which it hopes will ease concerns of regulators about the proposed merger of the two brewers.

The move will be the second major sale of assets that the two companies announced as they begin to create a giant in the industry with revenue annually of close to $64 billion that would represent close to 30% of the global beer sales.

The combination will give AB InBev, which is already the largest brewer in the world, a large operation across Africa, where it currently does not have much and greater dominance throughout Latin America.

During November, SABMiller announced it would sell the 59% stake it has in MillerCoors in the U.S. to its partner in a joint venture Molson Coors Brewing, for the price of $12 billion.

That sale includes the rights globally to sell the Miller brand and the rights to sell Peroni and other beers in the U.S. The deal would make Molson Coors the United States’ second largest brewer, behind only AB InBev.

On Thursday, AB InBev announced that it would be seeking a buyer for its Grolsch and Peroni brands and the associated brands across the Netherlands, Italy and Britain.

It also announced that it would seek to liquidate it Meantime Brewing Company, which is a craft brewer in Britain that was bought in May by SABMiller.

The announcement comes after reports this past weekend indicated AB InBev were considering selling Grolsch and Peroni to appease the regulators.

SABMiller announced that AB InBev would be the lead in the sales process.

The two brewers finally reached an agreement October 13 in principle for $66 per share in cash SABMiller.

Included in the transaction was an agreement that the two largest SABMiller shareholders – a Colombia family called the Santo Domingo’s and Altria the American tobacco behemoth – agreed to take on restricted shares as well as a smaller amount in cash at a discount to the overall cash offer, which allowed them to avoid a large tax bill from selling their holdings.