TAG Heuer Connected Has Production Increase Due to Demand 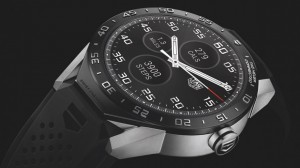 One month ago, when TAG Heuer Connected was first launched, there were some people wondering if there was a market for a luxury Android smartwatch that cost $1,500.

Apparently, the answer is yes since TAG Heuer said it must increase its production for the watch to meet its demands.

CEO Jean-Claude Biver from TAG Heuer revealed recently that the production of the smartwatch TAG Heuer Connected would be increased to 2,000 per week from 1,200.

Biver says retailers as well as other sellers have asked for close to 100,000 units and to help meet that kind of demand, TAG Heuer is increasing its production and suspending sales online until between May and June so the retail stores are able to have the stock they need.

Biver also said that due to the early success of the Connected, TAG Heuer is planning to create a full collection that is made of different executions and materials.

Some possibilities of new models include diamond and gold set models. These new watches would be made the latter part of 2016 and the start of 2017.

Again, the 100,000 watches have been requested by retailers for the TAG Heuer Connected, so it is unknown how many of the units are actually going to be sold.

TAG Heuer must be encouraged from the positive early response to the Connected by retailers though this is just the entry level into the smartwatch luxury market.

While the price tag of $1,500 for the Connected will limit its overall appeal amongst consumers that are no “watch people,” it could gain the interest of folks big into an analog watch.

That is true especially when you take into consideration the offer by TAG Heuer that allows the Connected owners to trade in their own smartwatch after 2 years to purchase a new one.