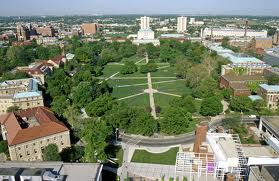 The University of Ohio State spent over $840,000 on travel by school president Gordon Gee since 2007. Over $550,000 of that total was spent in the last two years including two visits to China and two other trips that included stops in France, Iceland, the United Kingdom and Turkey.

The cost of Gee’s travelling exceeded that of the last two governors of Ohio and was three times more than Mary Sue Coleman spent, the president of the University of Michigan. The school administration said that endowment funds that are unrestricted pay for the costs and at no time are tuition or taxpayer’s money used.

The same school officials said Gee has to travel as the president of the university, which has ties with a number of institutions across the globe. His contract says he will fly first class domestically, business class on international flights and have access to a corporate jet from NetJets.

The school said the university is one of the largest and most comprehensive anywhere in the world and its president has a large outreach schedule with alumni, donors and key leaders nationally. Many times, said the school, Gee’s schedule does not accommodate flying commercially. Ohio State officials also said that Gee has been responsible for raising over $1.46 billion since he returned to operate Ohio State in late 2007.

However, many people are beginning to question the transparency of his travel and the real purpose for some of his trips.