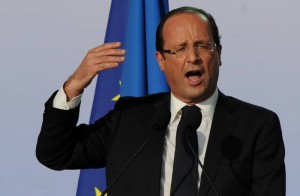 Francois Hollande the president of France said on Monday that the European Central Bank would decide to purchase government debt later in the week, reinforcing the expectations that the institution, based in Frankfurt, will follow other big central banks into quantitative easing.

The ECB on Thursday will take a decision to purchase sovereign debt that will provide substantial liquidity to the economy in Europe, said Hollande. It will create an environment favorable to growth.

President Hollande said this to business leaders during a speech at Elysee Palace.

The remarks made by the leader of France were surprising, as they appeared to foretell the ECB action, which guards its independence from the region’s governments fiercely.

A spokesperson from the ECB declined to make a comment, noting that the meeting of the ECB was not until Thursday.

However, Hollande is not entirely announcing something that comes as a big surprise.

Officials from the ECB have sent signals out recently that they are ready to launch large scale bond purchases from governments, known in the financial industry as quantitative easing.

Mario Draghi the President of the ECB has down played divisions, insisting the bank’s governing council is united it the determination to deliver its mandate of inflation under but still near 2%

With consumer prices lower by 0.2% during December based upon an annual basis across the eurozone, analysts said quantitative easing as imminent.

If the central bank does not announce a new plan on Thursday, it could produce an upheaval in the financial markets and help to destabilize the euro region.

Still Hollande’s comments were unusual in their bluntness given the traditional resistance by the ECB to political pressure and the efforts by leaders in government to avoid an appearance of them telling the ECB what it should do.

Hollande made his remark halfway through his speech that outlined the outlook for the economy in France.

He repeated that it is expected that economic growth would accelerate to 1% from last year’s 0.4%, helped by the drop in the price of oil and the euro weakening.