Payrolls in the United States increased less than the estimate in August. The gains for the previous two months were revised down. These indicated that the expansion has struggled to gain momentum. 169,000 workers were added last month, which was below the average estimate of 180,000 made by 96 economists in a Bloomberg poll. Jobless rate dropped to 7.3 percent, which was the lowest since December 2008. This was attributed to the workers who left the labor force. 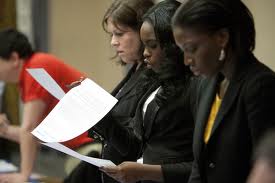 Larger gains in employment are needed in order to propel the consumer spending that accounts for 70 percent of the nation’s economy. Treasuries went up as investors speculated that Federal Reserve policy makers will temper plans to pull back its stimulus program.

The benchmark 10 year yield dropped six basis points to 2.93 percent. The yield reached 3.005 percent earlier. This was the first time since July 2011 that it reached 3 percent. The Standard & Poor’s 500 Index erased the increases to close less than 0.1 percent higher at 1,655.17 due to the tension between the US and Russia with regards to Syria’s civil war.

The survey by Bloomberg showed estimates for payrolls ranged from increases of 79,000 to 220,000 after gains of 162,000 in July. Changes were made in previous two months to indicate a reduction of 74,000 jobs.

The jobless rate, which came from a survey of households instead of employers, was expected to remain at 7.4 percent. This was according to a survey by Bloomberg.

The rate was lower as working age people in the labor force dropped. The participation rate went down to 63.2 percent, which was the lowest since August 1978, from 63.4 percent the previous month.

Increases in hours worked and earnings were seen as good indicators. The average work week increased six minutes to 34.5 hours. Average hourly earnings went up 0.2 percent to $24.05 in August. Over the past year, earnings increased 2.2 percent.