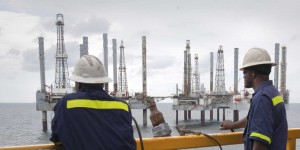 Crude oil rose in price after explorers in the U.S. reduced their rig counts to a low of five years, signaling further production drops.

West Texas Intermediate futures bounced after news by Baker Hughes was released that said rigs that targeted oil in the U.S. dropped by 26 this week to 614.

Prices fell by as much as 1.7% earlier on data from the government that showed the U.S. had added only 142,000 jobs in September, compared to a gain of more than 200,000 projected by analysts.

Oil has stayed close to the $45 per barrel rate for over four weeks after it had plunged in August to a low of six years, even as crude stockpiles in the U.S. stay more than 100 million barrels over the season average for the past five years and OPEC pumps above its targeted output.

Oil was holding steady despite bad news is often times a sign that a rebound was nearing, said one analyst.

West Texas Intermediate for delivery in November was up 80 cents equal to 1.8% and settled at a barrel price of $45.54 Friday afternoon.

Futures were down 16 cents for the week. The futures volume traded at 20% above the average of 100 days.

Brent oil for November settled up 44 cents to $48.14 on the ICE Futures based in London. The benchmark European crude closed at a premium of $2.59 to West Texas.

America’s oil drillers idled over half the rigs of the country since October of last year as the largest crude suppliers in the world battle for more market share.

The crude pumped out of shale formations in the U.S. helped created a glut globally that pushed prices lower by almost 60% since June of 2014.

Crude output in the U.S. declined by 40,000 barrels per day last week to 9.1 million, the least since November. Production slipped in 7 of the past 8 weeks.

Wages in the United States stagnated and the rate of unemployment was unchanged during September at 5.1% as people left the workforce, said a report on Friday from the Labor Department.