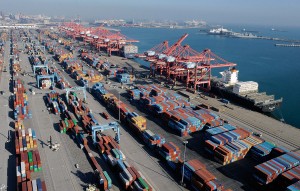 The trade deficit in the U.S. widened during August by its most in the last five months as imports started to pick up and weaker growth overseas limited sales to those abroad.

The gap widened by 15.6% to over $48.3 billion from July’s revised amount of $41.8 billion, said the Department of Commerce on Tuesday.

The forecast by economists was for the deficit to be $48 billion. Exports of U.S. goods dropped to their lowest level since June of 2011.

The U.S. dollar is the strongest it has been in 12 years and weakness is being seen in emerging markets like China, which are impeding sales prospects for companies in the U.S.

Consumers’ appetite for everything from mobile phones to apparel has signaled a steady flow of imports that keep the trade deficit higher and weigh on the economy of the U.S.

The issue that is the most overriding is exports are declining due to weak global growth, said one Wall Street chief economist as trade is clearly about to become a drag on our growth.

The shortfall in August was the widest in 5 months. Economist estimates ranged from a low of $40.1 billion to as high as $50.2 billion. The deficit in July was revised from its original amount of $41.9 billion.

Imports were higher by 1.2% during August to $233.4 billion from July’s $230.5 billion. Purchases of consumer goods were higher by over $4 billion, with over half that advance from imports of mobile phones.

Imports of capital goods, with the exception of cars, were up $1.1 billion, reflecting the gains in generators and telecom were lower decreased by 2% to just over $185.1 billion during August. Those have receded from the $197.7 billion reached during October.

The decline in August reflected a drop in value of industrial supplies, which included oil, metals and plastics.

The shipment of motor vehicles and consumer goods also dropped.