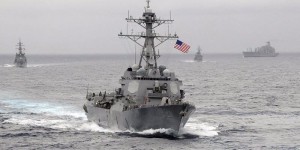 Northrop Grumman Corp won a contract of just over $93 million to manufacture a full-scale demonstrator of an unmanned spy drone, a flying wing that has large counter rotating propellers, which could take off as well as land on frigates, and destroyers, said the Pentagon late this week.

Northrop has worked on the design for this new drone for a number of years under the joint program the company is involved with known as Tern that is led by the Office of Naval Research at the U.S. Navy and the Defense Advanced Research Projects Agency.

Officials in the navy won an unmanned aerial system that could carry out missions for intelligence, reconnaissance and surveillance from warships that are smaller.

However, the current drones cannot take off or land from confined spaces at seas then stay airborne for extended periods.

The Northrop contract will have the company build a medium-altitude, full-scale demonstration aircraft that could operate on smaller warships. If the ground based testing is successful, the contract would then fund a demonstration at sea, according to an official with the defense department who requested anonymity.

There was just one other company competing for this contract, Aerovironment Inc, but it did not submit any bid, said officials.

Officials at Northrop discussed the design concept of the Tern with reporters in early December and show a design model of a flying wing that was 40-feet across that lands and is able take off from sitting down on its tail, then tilting to fly with its rotors located on the front.

Scientists with the Navy designed a ship-based experimental fighter named Convair XFY-1 Pogo during the 1950s that provided ships with air support, but it did not get through the stage of being a prototype.

Unmanned aircraft are becoming more and more important in the warfare of the 21st century as well as reconnaissance and surveillance flights that do not need a pilot.