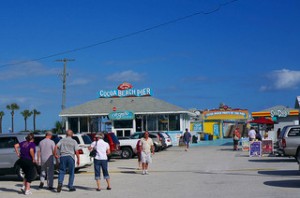 One motel in Cocoa Beach, Florida has had a problem filling rooms and lounge chairs. In order to attract more guests, the Fawlty Towers Motel has had to resort to attracting guests that has raised the eyebrows of many local residents.

Starting May 1, the Motel will become a nudist resort. The motel’s owner said he decided to convert to a nudist resort since there is no competition for over 100 miles and it is a niche he thinks will do well in the market. He said it is his last recourse to save the business.

The older people who come to the area in the winter to escape the cold, stay in rental condos in order to not pay the city’s bed tax and his 32 room motel then must  struggle against the bigger chains that can afford to charge less and have a much bigger marketing budget.

Ten of his rooms are booked for the first day the change takes place, but his weekend reservations have started to fill up quickly. Guest without a room can purchase a day pass. The pass will give them full access to the pool and the motel tiki bar. The day pass sales may end up earning more than overnight bookings.

The owner added screening and higher balcony fences to restrict the view from beyond his property. The doors all have locks that are coded so people cannot slip into the hotel. Many local residents do not agree with having a nudist resort amongst all the other resorts.