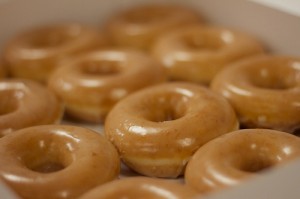 Winston-Salem, North Carolina based Krispy Kreme Doughnuts has left its investors with a bad taste in their mouths.

The doughnut company’s shares dropped sharply on Friday after the release of its fiscal second quarter earnings were disappointing. The company announced a profit that did not meet expectation and gave a weak outlook for the future last Thursday.

Net income for Krispy Kreme fell to $4.7 million or equivalent to 7 cents a share, for the recent quarter ending August 4. Profit was down from a year ago of $4.9 million during the same reporting period.

After the company adjusted for refinancing of debt losses as well as other special items, profit was 14 cents a share, compared to just 12 cents during the same quarter last year.

Revenue during the same period was up by over 10% to close at $112.7 million, as more clients visited restaurants and an improvement of profits margins was registered. Last year during the same quarter, sales were $102 million.

Revenue at Krispy Kreme stores opened for 13 months or more was up 10%. This is the key indicator for analysts of financial performance since it takes away the impact of a recently closed or opened store.

The company noted, as well that it was pleased with operating results and sales of its new small factories it had opening during 2013.

James Morgan the Chairman, President and CEO said the company was confident about its new smaller and efficient model. The company is planning to construct four to five other small factories over the rest of the fiscal year.

Krispy Kreme revised its forecast for the full year for earnings to 59 to 63 cents a share, while analysts expected earnings of 64 cents a share.

Shares of Krispy Kreme dropped by over 15% or $3.51 to end trading on Friday at $19.72. Over the last year, the price of company stock has tripled in value.