The House passed a measure Thursday that would prevent the doubling of student loan interest on July 1. The legislation would keep the rates at prevailing market trends and end federal subsidies. It was voted along party lines, 221 to 198. 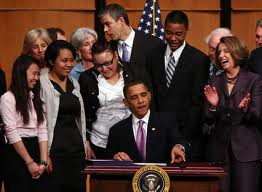 The next stage would be a standoff between House Republicans, Senate Democrats and President Barack Obama. They need to act on the issue before the deadline. Republicans said that they have devised a long-term plan that would get the government out of business of setting interest rates.

Democrats said that House leaders wanted to increase the cost of student debt. This indicated how both parties would handle the discussions with regards to the student loan. At stake is the loan rate of 3.4 percent for more than 7.4 million students with federal Stafford loans that are subsidized by the government. The interest rate would increase to 6.8 percent if Congress fails to act on it.

Democrats managed to fix the interest rate at 3.4 percent before Republicans took control of the House in 2011. Republicans were pressured last June to approve the extension of the subsidized rate for a year, just two days before it was set to expire.

At present, Republican leaders are insisting that they will stand firm. Democrats are also set to oppose the action of the Republicans and threatened White House veto. The House measure would allow student lending rates to reset every year, based on the interest rate of the 10-year Treasury note and additional 2.5 percentage points for Stafford loans. The Congressional Budget Office estimated that rates on Stafford loans would go up to 5 percent in 2014 and 7.7 percent in 2023.

Stafford loans would have a maximum of 8.5 percent while loans for graduate students and parents would have a cap of 10.5 percent. The measure would slash the deficit by $3.7 billion over the next 10 years. The White House maintained that the deficit should not be cut on the backs of indebted college graduates.