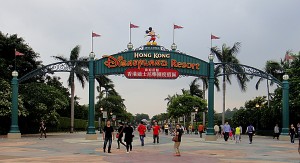 Hong Kong Disneyland has announced it is planning to open a third hotel, which will be its largest, in early 2017 so the amusement park can accommodate the huge influx of visitors from countries such as South Korea and China amidst intensifying competition from another local theme park.

The hotel will have 750 rooms and cost $550 million (HK$4.26 billion) to build, said company officials in a Monday morning statement. Hong Kong Disneyland said it posts a HK$242 million profit, which was its second consecutive profit, for the yearlong period ending in September. It was 100% more than its HK$109 million profit for the same period one year ago.

Visitors, to the Hong Kong Disneyland from China, were up by over 15% in 2013. The park is partially owned by the government of Hong Kong. Visitors from South Korea increased by over 27% said a park representative.

The expansion of the hotel said the park spokesperson, will help support the growing demand from the tourism industry that is booming in the area.

Hong Kong Disneyland is 48% owned by the Walt Disney Co, which is based in Burbank, California. It announced the design of an area by late 2016 that features characters from Marvel, after its new attractions such as Grizzly Gulch and Toy Story help push it to its first profit during fiscal 2012.

Sales at Hong Kong Disneyland were up by 15% to reach HK$4.9 billion during the most recent fiscal year, said the company statement.

The popular theme park has competed with Ocean Park, owned by the government, which drew more than 7.7 million visitors during its fiscal year that ended last June. The park is planning an addition of 30 new attractions by sometime in 2017 and a hotel with 495 rooms.

Visitors from mainland China to Hong King, the former colony owned by Britain, increased by nearly 17% last year to 40.8 million. That accounted for a 75% of all visitors to Hong Kong.

The city owns 52% of the theme park. Earlier attendance at the park was much lower than had been expected, which was the biggest reason the park did not show a profit for the first 7 years. The park is the smallest one Disney has anywhere in the world and critics cite its size and lack of many attractions as another reason.