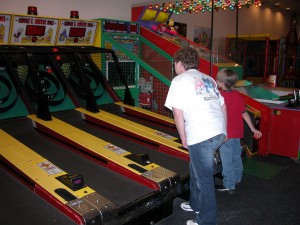 Chuck E. Cheese was sold to Apollo a private equity company in a sale that valued the restaurant chain that focuses on entertainment for children at nearly $1 billion.

The sale, which was officially announced on Thursday will have Apollo, the fund that billionaire Leon Black controls, pay for each Chuck E. Cheese share of stock at the rate $54.

That price of $54 a share is a premium of 11.5% on the closing price on Wednesday of $48.43. Chuck E. Cheese’s parent company, CEC Entertainment Inc contracted Goldman Sachs in 2013 to review its options to sell. The CEC Entertainment group specializes in throwing children’s parties.

The price of the sales is a premium of 25% to the CEC price prior to news that the company was seeking a sale that broke back in December.

Apollo is amongst various private equity companies that have expressed an interest in the group, said people familiar with the agreement. The lead financing partner with Apollo will be Deutsche Bank.

CEC and the franchises account for 567 Chuck E. Cheese locations in the U.S. The restaurants have robotic and musical entertainment, rides, games, play areas, while they serve Buffalo wings and their specialty pizza.

Guests can take home stuffed animals and other toys after redeeming coupons they win in the games they play.

This deal comes during a week when other companies are announcing takeovers and mergers. Charter Communications on Monday announced a bid for Time Warner Cable its rival cable provider. The offer of $61 billion, which would include debt, comes following a takeover of $16 billion by Japan’s Suntory of Jim Beam the spirits makers in the U.S.

In the 1970s, Chuck E. Cheese was founded by Nolan Bushnell who is the Atari founder and a video industry pioneer. He started the restaurant to encourage families to remain at video arcades longer.

Bushnell, whose biggest claim to fame was hiring Steve Jobs and then later turning down Jobs’ offer of a stake of 30% in Apple for just $ 50,000 during the mid 1980s.