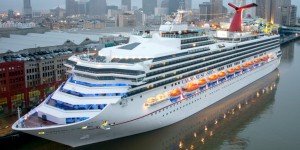 Carnival Corp announced it would be adding 9 new cruise ships over a period of four years beginning in 2019, steps to boost fuel efficiency and to add the newest amenities in the industry.

The vessels will be sailing in North America and Europe along with emerging markets like China, said the company based in Miami, which is the largest operator of cruise liners in the world.

While the volume of passengers has grown faster than capacity recently, some markets like the Caribbean, have seen prices drops due to competition.

Arnold Donald the CEO at Carnival said the company was excited it was taking its next step in it enhancement plan for the fleet with two new agreements consistent with the company’s long-term strategy.

The company currently has 101 ships that make up its fleet. The number will contract this year, as two will be added but four will be removed.

In all 10 ships have already been ordered to enter the cruise lines service between now and the end of 2018. Donald is attempting to boost company margins by using the size of the company to obtain better discounts on all its purchases.

Over the last decade, capital spending by Carnival has ranged from as little as $2 billion to as high as $3.6 billion annually.

In 2014, capacity growth in the industry slowed to 2.6%, which is the lowest in close to 12 years, according to a report from an analyst in the industry. Growth is expected to reach between 3% and 5% in 2017 as well as 2018, with Carnival being at the lower end.

Fincantieri SpA will construct five of the vessels for Carnival at is Marghera and Monfaclone, Italy shipyards, while the remaining four will be constructed by Meyer Werft GmbH in Germany and Finland.

The Britannia is one ship entering service for Carnival this year. It will be the largest ever designed vessel exclusively for the UK with a passenger load of 3,657.