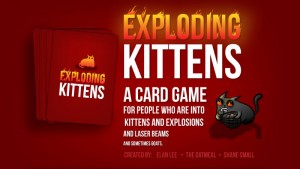 Exploding Kittens earned itself a number of believers. Initially, the Kickstarter brainpower said the new card game of exploding kittens would be popular. However, it was not predicted how vastly popular the game would eventually become.

While the card game might seem somewhat strange, and like something that could be a gimmick and not the real thing – it has taken in over $8 million in funding. A game that was expected initially to sell decks of cards of a few thousand surpassed easily every prediction that was made for the product.

Elan Lee, Matthew Inman and Shane Small, who all enjoyed successful professions and ventures prior to Exploding Kittens was hatched, now have completely different paths than what they might have been dealt by fate just a couple of years ago.

Inman is behind Oatmeal the comedy site, while the two others developed names for Xbox. The premise of Exploding Kittens is quite simple – players draws their cards until one that includes an exploding kitten.

During the game, there are other cards with interesting information, which give the players an advantage or disadvantage by shuffling, drawing additional cards and move skipping.

However, as simple as the game really is, it is generating serious cash in the first year on the books. Though the Kickstarter is closed now and there has been a cap on donations, the record it reached was enough for its team to do nearly anything they wanted with branding the Exploding Kittens.

The record set by Exploding Kittens broke the one set by Ouya, the console system and will have a big impact on how campaigns at Kickstarter will be viewed.

This project admittedly was able to draw attention for its simple concept yet wild idea, but no one ever though it would be able to generate such a large sum of money and now the world of Kickstarter has a new legend.