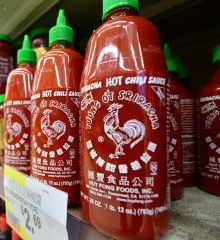 Wednesday night a city in Southern California declared that the factory producing the hot sauce called Sriracha a public nuisance.

The city gave the operators of the factory 90 days to make the necessary changes that will stop the odors that have prompted some residents to complain.

The action of the City Council of Irwindale allows officials from the city to enter the factory ordering changes if there continues to be an odor after the deadline of 90-days has passed. The measure was passed by a vote of 4-0.

The decision was made despite the testimony given by experts in air-quality that progress had been made in finding a resolution.

The experts said its inspectors took air samples within the plant and believed what was gathered should allow the city and factory to resolve any differences.

John Tate the attorney representing Huy Fong Foods, the maker of Sriracha sauce said the business was working with air experts on a filtration system and was committed to having a long term solution in place by the first of June.

Tate called the declaration of a public nuisance a demonstration of the city flexing of its muscles and a thumbing in the eye of Huy Fong by the city of Irwindale.

Irwindale sued the sauce maker last October requesting a  judge  stop production at the factory, saying city residents downwind  complained of fumes from red hot peppers that had been ground, of stinging their eyes as well as giving them coughing fits and headaches.

A judge in November ordered the sauce maker to stop making the odors, but then the pepper-grinding season of each year between August and October had already ended.

An injunction was granted and the court set a date for trial for November.

At the same time, several residents also complained the smell was continuing to persist as workers at the factory continuing bottling the hot sauce that in Asian homes and restaurants is a staple. Most of the complaints have come from just four homes.

Huy Fong Foods relocated two year ago to Irwindale with a new plant worth $40 million in the city of just 1,400 residents.