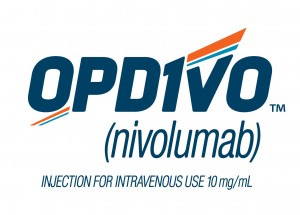 A new cancer drug from Bristol-Myers Squibb that works through unleashing the immune system of the body extended the survival rates for patients with lung cancer compared with chemotherapy during a clinical trial.

However, the trial’s results were short of expectations on Wall Street and shares of Bristol-Myers tumbled on Friday.

The pharmaceutical giant’s stock was down 6.6% after the results of the study for Opdivo had been released during the afternoon.

Analysts said the survival benefit overall was smaller than was expected and that the drug did not show a significant benefit in a subgroup of the trial’s patients, which could make the drug more vulnerable to other immune boosting cancer treatments developed by Roche and Merck & Co.

Opdivo is a PD-1 inhibitor and was approved this past March as treatment for squamous nonsmall-cell cancer of the lung. The results of the study on Friday were for a form of lung cancer that was more common.

The late-stage trial showed that the patients who received Opdivo had an average overall rate of survival of 12.2 months, while those treated only with decetaxel chemotherapy had a rate of 9.4 months.

Adverse secondary effects, which are associated with the use of Opdivo, include nausea and fatigue but were usually less severe than with those who had taken decetaxel.

In April, Bristol-Myers said it stopped the study earlier than was planned due to the superior efficacy showed by Opdivo, allowing the patients in the study who were taking the chemotherapy treatment to take Opdivo.

The benefit experienced through using Opdivo was higher in patients who had tumors that were large in PD-L1, whose interaction with PD-1 on immune cells gets blocked by the treatment.

Amongst these cancer patients, the average overall rate of survival of those who took Opdivo was 17 months compared to only 9 months for using decetaxel.

In contrast, no significant difference in survival rates existed between the drugs for patients who have tumors with a low amount of PD-L1.