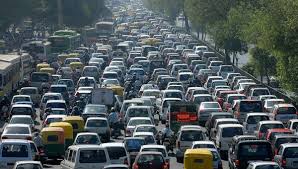 The growth of auto sales in China during January fell 7% amidst a slowdown in the economy and curbs the government imposed to fight against traffic and smog.

Drivers in the biggest auto market in the world bought over 1.85 million passenger vehicles, said the China Association for Automobile Manufacturers on Thursday. January was the first time that monthly sales surpassed the 1.8 million mark.

Growth in auto sales is forecasted to slow down sharply from the expansion of 15.7% last year to only as much as 10% this year. Sales grew during December by 17%.

Leaders in China see manufacturing of autos as way to grow economic development. However, the rapid growth has left Shanghai, Beijing and other large cities choking with smog. Some of the cities responded by limiting how many new vehicles can be registered.

Sales were helped, said on analysts, by rumors of sales restrictions taking place in other big cities, as the longer rumors last the better sales will continue.

China’s auto market is the most crowded in the world, with global automakers as well as dozens of small brands from China battling over sales.

The intense competition has squeezed the local Chinese automaker that has less advanced technology. The smaller automakers are hurt even more when car sales begin to slow.

General Motors said earlier that its GM-brand vehicle sales by its company and its partners in China during January were up 12% to 348,060, which is a new monthly record. Ford Motor said its sales were 53% higher compared to last January and were up to 94,465.

Kia Motors from South Korea experienced an increase of 8.5% during January to 40,175.

Newcomers continue to enter the glutted market with Renault SA from Frances signing an agreement late last year to open a factory in China for the first time with a Chinese partner.