Allegiant Declines Due to Canceled Flights

Allegiant Travel Co. dropped the most since July after it canceled 15 percent of its flights after the grounding of its Boeing Co. MD-80s to make sure that its emergency slides meet safety standards. The airline moved 16 of the canceled flights the next day, when it expects to complete a full inspection. The company has not determined how the grounded planes will affect flights over the weekend or early next week, which is its busiest period. 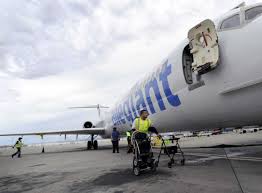 The MD-80s accounts for 85 percent of Allegiant’s fleet. They have an average age of around 23 years according to the company’s regulatory filings. The airline provides low fares and few amenities on its flights to holiday destinations.

Allegiant spokesman Brian Davis said that it was the company’s decision to take the airplanes out of service and remedy the problem. Allegiant shares dropped 4.9 percent to $97.91, which is the largest fall since July 23. The stock has gained 33 percent so far this year.

Allegiant found the problem after slides were deployed during an emergency evacuation of a plane taxiing for departure from Las Vegas last September 16. The Federal Aviation Administration learned about the problem while probing the deployment. The agency directed the company to report the inspection status of all slides installed on its MD-80 planes.

The carrier found out during the inspections that it hadn’t met stricter maintenance standards it agreed to previously with the FAA. The company was required to overhaul slides more than 15 years old every year. Allegiant had been doing the work every three years, which is the required timeline of the manufacturer.

15 MD-80s were operating with four compliant slides. Davis didn’t say how many slides were found that didn’t meet the overhaul standard. Non-complaint slides must be sent back to the maker for work that would take around five business days.

$1.03 Billion in Sales Expected for TopBuild Corp. This Quarter