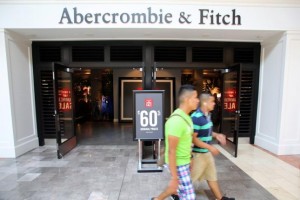 On Thursday, struggling retailer Abercrombie & Fitch reported a drop in revenue and loss that was wider than had been expected during its first quarter, although the teen retailer said it is expecting to see sales trends improve during the year.

Arthur Martinez the Executive Chairman said during a news release the results for the first quarter had been pressured by both external and internal factors, but that the company saw some sequential sales improvements, in particular within the Hollister brand. Martinez said sales at Abercrombie’s continued improving during May.

Abercrombie warned previously that it would be facing declines in its business of logos and would have significant pressure from currency during the first six month of the year.

The pressures come as the retailer works through a number of changes it is hoping will revive its image.

In April, the apparel retailer announced it would stop hiring its sales staff on physical attractiveness or body type and would relax its infamous “look policy” so employees could dress the way they wanted.

The company said it was considering changes that would make its dim-lit stores that blast with music into more friendly ones, while the sex-tinged company marketing is being pulled back.

Former controversial CEO Mike Jeffries created a cult following with teens clamoring for the logo emblazoned sweatshirts, t-shirts and were willing to pay full price for their tattered jeans.

In December, Jeffries abruptly left Abercrombie and the company since has been operating less a CEO until they can find a replacement. Which highlights the suddenness of what Abercrombie said was Jeffries’ decision to retire.

For the May 2 ending quarter, sales at its existing locations were lower by 8%, led by the drop of 9% in international sales at same stores.

By brand, sales at same stores for Abercrombie & Fitch were down by 9% and for Hollister by 6%.

Overall, the company reported a $63.2 million loss equal to 91 cents per share, in comparison to a loss of just over $23.6 million equal to 32 cents per share for the same period one year ago.