The Avengers Drops to Second 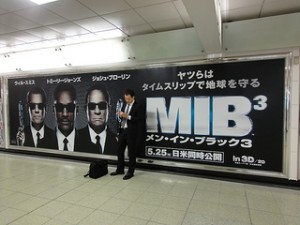 Memorial Day weekend will be remembered by Sony as the weekend Men in Black 3 took the box office title away from Disney’s The Avengers. The sequel starring Tommy Lee Jones, Will Smith and Josh Brolin took over first place in the box office with a three-day $55 million haul. Early predictions say the movie will earn another $15 million on Memorial Day bringing its four-day haul to $70 million, but that is lower than many had estimated.

The $230 million sequel was a huge budget to overcome but many thought it has its own built in audience from its previous two franchises. Sales internationally were better for the movie as it took it $132 million in its first week of being in theaters.

The Avengers still held on quite strong by earning $37 million, which put it securely in second place. Its total was a drop of 34% from the previous weekend, but it passed the $500 million mark and became only the fourth film to ever accomplish that feat. More impressive is the movie has only been out for 23 days. Avatar held the quickest record to $500 million previously with 32 days.

The next two spots were taken by Battleship and The Dictator respectively. Battleship in its second week earned $10.8 million bringing its ten-day total to $44.3 million and the movie had a $209 million budget. The Dictator earned $9.6 million and has a 12-day accumulated total of $41.4 million.

The top five was rounded out by Chernobyl Diaries a horror film by Paramount. The movie only earned $8 million during the weekend, with $3.5 million of that on just Friday.