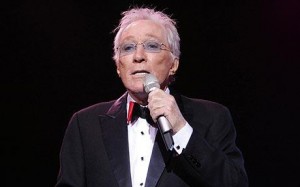 Andy Williams, who might be best known for his Moon River rendition that propelled him to stardom during the 1960s died on Tuesday in Branson, Missouri at his home. Williams had been battling bladder cancer it was announced his family. The singer was 84. In 2012, he celebrated his 75th year in show business. Williams leaves his wife Debbie and three children Christian, Noelle and Robert.

In his career, Williams had three platinum and 17 gold records. He enjoyed his later years in life playing golf, while spending time between his Branson home and his home in La Quinta, California. In Branson, he appeared at the Andy Williams Moon River Theater every year since 1992.

On that particular stage, in November of last year, Williams made an announcement that had had been diagnosed with bladder cancer. At that time, he told the audience the cancer was no a death sentence and his intention was to be a survivor of the disease.

Williams was the son of Wall Lake, Iowa railroad worker. He sang in the church choir where his family attended and with his older brothers Don, Dick and Bob. In the late 1930’s, the four Williams’ became very popular as the Williams Brothers Quartet.

Following WWII, the quartet joined a nightclub act with Kay Thompson. Williams later admitted in his 2009 memoir that he carried on a long lasting affair with Thompson. She was 18 years older than Williams.

Williams was not immune to scandal as in the 1970s his ex-wife Claudine Longet was tried for shooting and killing her lover, the internationally renowned skier Spider Sabich. She was found guilty for a lesser charge of criminal negligence and only received a 30-day sentence.