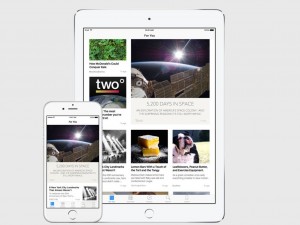 Apple has discovered a serious glitch in its Apple News app that has affected counts of users accessing the service. The company disclosed that publishers serving content through the iOS 9 News app have been receiving erroneous traffic data. The glitch has led to an undercounting of the number of users reading a particular new story.

Apple unveiled Apple News at the Worldwide Developers Conference last year. The app is essentially a feed for users to read the news stories that interest them. The platform is designed to share news from publishers all over the world and has already partnered with more than 100 publishers to provide content.

In a statement, Apple SVP of Internet Software and Services Eddy Cue said that it is better that the company undercounted rather than overcounted when it comes to usage data. Accurate traffic numbers are important for online content monetization because the numbers are used to to price and sell advertisements. If no one has any idea how many people have read a particular story, there’s no way to assign a proper advertising rate.

With Apple News, publishers retain all proceeds from ads they sell on their own and 70 percent of revenue for ads sold by Apple. All advertisements must be served through Apple’s first-party iAd network. Apple says that new features are coming for iAd, including a self-service ad-buying tool expected to launch in the next two months.

Apple did not provide details on the glitch or mention when it was discovered. The apparent bug went unnoticed because Apple was focusing on building out other app features. Apple says that it is working on fixing the issue. Previously, Apple kept publishers up to date with simple emailed spreadsheets. Today, the News app supports limited integration of tools from comScore if publishers want more detailed information.

Apple has yet to reveal information regarding regular usage rates or per-publication traffic. An estimated 40 million people have used News since the app launched in the U.S., U.K., and Australia last fall. For comparison,Apple has sold more than 1 billion iOS devices.