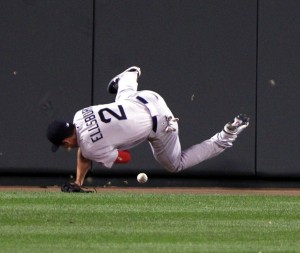 All of this has come when the Yankees front office has claimed they want to cut costs, not increase them.

New York has yet to re-sign all-star second baseman Robinson Cano a free agent who appears to be drawing big interest from Seattle.

Rumors are the Yankees will not budge from $175 million that was rumored to be offered the talented second baseman. One inside source has said Seattle might go as high as $200 million.

With Ellsbury signing, the Yankees most likely will move Brett Gardner a good defender with exceptional speed to left field to make room for Ellsbury. The lightening fast Ellsbury led the American League with 52 stolen bases in 2013, while hitting .298 for the World Series Champions.

The Yankees chose Ellsbury over Shin-Soo Choo, the talented free agent outfielder for Cincinnati who is sought after by many clubs.

The contract is for seven years and makes Ellsbury the third highest paid outfielder ever. An option for an eighth year could make the value overall more than $169 million. The only two outfielders to sign larger contracts were Matt Kemp and Manny Ramirez, whom both signed for $160 million.

The outfielder flew to New York Tuesday night from his Arizona home to have his physical, said one source.

The deal is the fourth biggest to be signed by the Yankees trailing just Alex Rodriguez’s $275 million, Mark Teixeira’s $180 million and CC Sabathia’s $161 million.

It is uncertain whom beside Cano the Yankees will try to sign, but they need to make improvements in their starting rotation and will need to dig deep if they want to pursue Masahiro Tanaka the free agent from Japan.

However, the Yankees always surprise and the team might have another one up its sleeve before spring training.