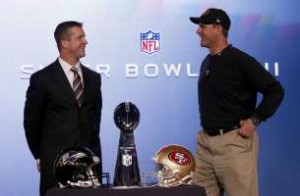 On Sunday, February 3, over 100 million people are expected to tune in to watch Super Bowl XLVII at the Superdome in New Orleans, Louisiana. This year’s game will feature the NFC Champion San Francisco 49ers against the AFC Champion Baltimore Ravens. The winner will receive the NFL’s coveted Vince Lombardi trophy.

The American spectacle is quickly gaining an international crowd and this year’s game is expected to have the largest viewer turnout of any previous Super Bowl. Both teams have strong defenses that have given up more points than they are used to, while both have capable offenses.

Baltimore is led on offense by Joe Flacco their talented quarterback who will use his speedy receiving corps to open up the field. Baltimore also has a strong rushing attack anchored by running back Ray Rice. San Francisco’s offense is led by Colin Kaepernick, their second year quarterback, who is equally dangerous throwing the ball as he is running the ball.

Besides the usual storylines of offense and defense, this Super Bowl has two others. Ray Lewis the 17-year veteran for the Ravens announced at the end of the regular season that he would retire as soon as his team either won the Super Bowl or was eliminated from the playoffs. Sunday’s game, win or lose, will be Lewis’ last in the NFL.

Another storyline is about the two head coaches of the two teams. Coaching the Baltimore Ravens is John Harbaugh, who worked his way up from coaching at the college level to become head coach five seasons ago at Baltimore. On the opposite sideline will be the head coach of San Francisco, Jim Harbaugh, who just happens to be a former quarterback in the NFL and John’s brother.