Sportsbooks: Pacers on the Verge of Elimination 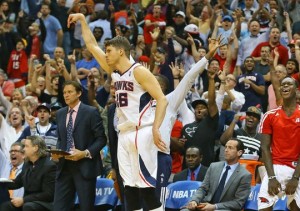 The Indiana Pacers were pushed to the brink of elimination on Monday night, when they lost to the Atlanta Hawks in Game 5 of their best of seven first round NBA Eastern Conference playoff series. Atlanta now leads the series 3-2. The Pacers now have to win both games that remain in the series if they want to move on to the Eastern Conference semifinals.

Many sports bettors are unsure of the value of the Pacers as they head to the sixth game of the series in Atlanta. In order to make the most informed wager online, many bettors head to a top sportsbook review site to find out what sportsbooks have the most detailed trends, point spreads and head-to-head breakdowns.

Indiana experienced one of its worst quarters of the season in Game 5 on Monday. During the second quarter of their game, the Pacers were outscored to the tune of 41-19.

In the game, Atlanta hit 15 of its 3-point shots, which is the most the Hawks have ever made during the postseason.

Indiana even outscored the Hawks by 18 points over the game’s final 15 minutes, but could not get any closer than a three-possession game thanks to being outscored by 22 points during the second quarter and never being able to fully recover.

Frank Vogel the Pacers head coach started the ill-fated second quarter with his reserves on the court. The Pacers were then outscored in the first six minutes of the quarter 25-4.

The Pacers were the No. 1 team in points allowed during the season at 92 per game, according to data from the official site of the NBA. However, in half of one quarter they gave up 25. It is not hard to understand why the Pacers lost the game and are on the verge of going home for the summer.

With Atlanta’s spread offense, the Pacers have been taken out of their defensive comfort zone of clogging the middle with Roy Hibbert their 7-foot-2 shot blocker. Now with their five players including their center Pero Antic spread around the perimeter, the Hawks can have open lanes for any of their players to drive to the basket.

The game plan has worked well as Atlanta on the verge of winning the series and sending the top seed in the East home for the summer.