PSU Did Not Regard Children’s Safety 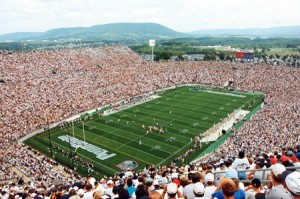 An internal investigation has revealed that both senior school officials at Penn State University and Joe Paterno the Hall of Fame football coach concealed critical facts about the child abuse committed by Jerry Sandusky. The investigation said the facts were concealed because they worried that bad publicity would hurt the school and the sports program.

Louis Freeh the former director of the FBI released his report early Thursday that outlined the school’s failings related to Sandusky, the convicted pedophile. The full report was 267 pages in length and follows an eight-month investigation by the former director who was hired by trustees at the university only weeks after Sandusky had been arrested last November.

The report said that Graham Spanier, the school president, Paterno, Gary Schulz a school vice president and Tim Curley the school’s athletic director all failed to protect against a sexual predator that had harmed children for more than 10 years. The report said the university’s most powerful leaders Spanier, Schulz, Curley and Paterno concealed facts critical to the child abuse in order to avoid bad publicity for the school.

Sandusky is currently waiting to be sentenced for his conviction on 45 of 46 counts. The scandal that broke in November led to the school president and Paterno’s ouster.

Last month’s trial included strong testimony from eight men who said they were abused by Sandusky when they were boys. The investigative team held over 400 interviews with former and current employees at the school, including everyone associated with Paterno’s football program. Paterno died in January of lung cancer, before telling the investigators his account of what took place.