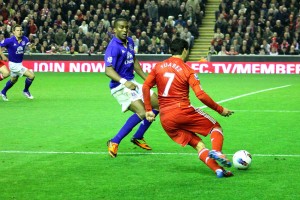 The Professional Football Association in England has released its shortlist of six men for the Player of the Year trophy.

The most controversial player on the list is Liverpool’s Luis Suarez. The Uruguayan has been one of the English Premier Leagues’ most effective players. However, he has had his reputation damaged by the ban of eight matches he received last season for racial abuse against Manchester United’s Patrice Evra and claims he like to take dives to draw yellow cards and penalties from referees.

The biggest rivals Suarez has for the trophy is Tottenham’s Gareth Bale, who was also nominated for the Young Player and Robin van Persie who was the winner last season while with Arsenal, prior to has leaving for Manchester United.

Notably absent is Michu the forward from Swansea. There were no goalkeepers or defenders on the list that is compiled from votes from fellow football professionals.

Rounding out the list was a duo from Chelsea Eden Hazard and Juan Mata and Michael Carrick an unsung hero for Manchester United. The defending league champions Manchester City did not have anyone on the short list.

Suarez may be controversial, but his 29 goals during this term have helped restore Liverpool, making him a worthy inclusion on the list.

Also listed on the Young Player list was Hazard where he and Bale will face competition from Romelu Lukaku, Christian Benteke, Jack Wilshere and Danny Welbeck.

Carrick, Wilshere and Welbeck are the only players from England amongst the 12 men who were nominated in the two categories.