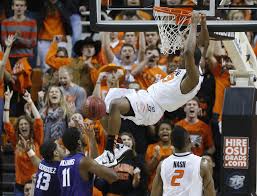 Marcus Smart a star basketball player with the Oklahoma State Cowboys shoved a fan of the Texas Tech Red Raiders during the final second of the Cowboys loss 65-61 to the Red Raiders in Lubbock, Texas on Saturday night.

Smart attempted to block a dunk by Jaye Crockett from behind with just 6.2 seconds left on the clock. However, he stumbled and fell out of bounds at the baseline.

As someone was helping him up, it appeared as if he exchanged words with a fan that was in the front row, prior to lunging at the same fan and pushing home with his two hands. The Texas Tech fan, who was wearing black, stumbled back but regained his balance before falling.

Officials and players pulled Smart away and pointed back to the direction of the fan. Smart was given a technical foul but not an ejection. He sat on the bench for the final seconds of the game.

Jeff Orr, the fan that was shoved by Smart, travels miles and miles annually to attend the basketball games of Texas Tech, according to Blayne Beal a spokesperson for the athletic department at Texas Tech.

Travis Ford the coach at Oklahoma State did not discuss the pushing incident during his postgame conference with the press.

He said he had not seen the incident and wanted to see it before making a comment about it. No Oklahoma State players were able to speak to the press following the game.

Bob Bowlsby, the commissioner of the Big 12 will review the video of what happened on Sunday under the policy of sportsmanship the conference has. Bowlsby has options he can carry out from just a private reprimand to a public one to a suspension.

Oklahoma State can also provide its version of the story to Bowlsby before the commissioner makes his decision.

Curtis Shaw the coordinator of officials for the Big 12 said his officials did not have jurisdiction to eject players who became involved with a fan during the course of a game.

Shaw indicated that anything that involved a fan is in the hands of the school hosting the game.

The Cowboys, ranked No. 19 in the nation, have lost four consecutive games and five of their past six overall.