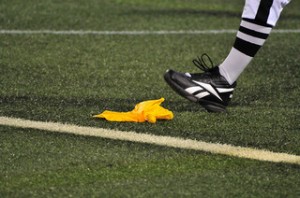 The third week of the NFL regular season ended Monday night with the Seattle Seahawks defeating the Green Bay Packers 14-12. However, the controversy over blown calls by replacement officials in that game and many others is alive and well.

Football writers, players and coaches believe the call that decided the game on Monday was one of the worst they have seen since replacement officials started in week one of the season. Players have started to complain that the integrity of the game is on the line and have demanded that the league office reinstate the NFL officials.

Players and coaches have been fined by the NFL front office for criticizing officials, but now the criticism is coming from all sides and the pressure is building.

With time running out on the clock in the final quarter, Seahawk’s quarterback Russell Wilson heaved a Hail Mary pass into the end zone. It appeared live and on replay that the ball was intercepted in the end zone by Green Bay. One official close by called for time to stop, which is usually done when there is a touchback, in this case, if the pass was intercepted by Green Bay.

However, another official raised his arms indicating a touchdown and giving the victory to Seattle. After reviewing the video tape of the play, the officials upheld the touchdown call and gave the win to Seattle.

That play was the last straw said many players and coaches. A number of players took to Twitter to express their frustration. Comments ranged from bring back the real refs to the NFL robbed us of a victory.