NFC East Title on the line when Dallas meets Washington 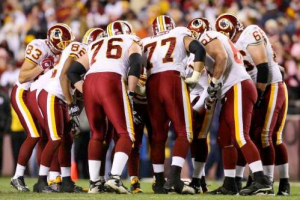 One week of the regular season remains in the NFL and two NFC East rivals the Dallas Cowboys take on the Washington Redskins to see who will win the NFC East title. For Dallas it is a win on Sunday or their season ends whereas Washington still has a slim chance of making the playoffs without a victory.

The winner will win the division title and host a wildcard game the following weekend, with their most likely opponent being the powerful Seattle Seahawks.

The two teams met on Thanksgiving just over a month ago when Washington won 38-31 in Texas. Dallas had three turnovers on the day and that has been one of their problems all season, as well as untimely penalties.

Robert Griffin III, just named to the Pro Bowl, is recovering from a knee injury and will not be as mobile as he was when the two teams met on Thanksgiving. Both teams have key players out with injuries, which will affect the overall play on both sides of the ball.

Dallas will be led by quarterback Tony Romo and will have DeMarco Murray in the backfield for this game after he missed the first meeting between the two teams. If Dallas can establish a running game, they will take the pressure of Romo and his play action will become that much better than it already is. Dallas will look to exploit the secondary for Washington, which is ranked 30th out of 32 teams giving up nearly 290 yards per game in the air.

Look for a high scoring game, as Dallas is prone to fall behind and then rally in the fourth quarter.