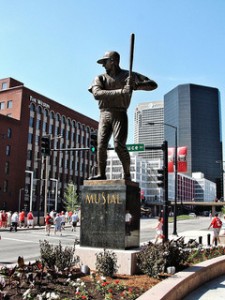 Stan Musial, known by most as Stan the Man, died on Saturday night at the age of 92. The Hall of Famer and former star for the St. Louis Cardinals was considered of one of the best players to ever play the game. Willie Mays, also a Hall of Famer, said in a prepared statement that he had never heard a negative word spoken about Musial.

Musial was at his home in Ladue, a suburb of St. Louis when he died and was surrounded by his entire family at the time of his death. One of Musial’s son in laws told the Cardinals that Musial had died.

Musial accumulated so many batting records over the course of his career that they all could not fit on his Hall of Fame plaque. He was so well liked by fans in the St. Louis area that the team built two statues in his honor outside the entrance to Busch Stadium where the Cardinals play all their home games.

Many considered his hitting prowess to be equal to both Ted Williams and to Joe DiMaggio. However, Musial played his career in a smaller market in St. Louis whereas Williams was more recognized playing in Boston and DiMaggio in New York.

During his illustrious career, Musical won the batting title in the National League seven times, the league MVP on three occasions and was a member of a World Series championship team three times in the 1940s.

Musial was a pitcher in the minors early on in his career, but thanks to an injury to his arm he was switched to outfield and first bases and went on to average .331 for his career, with 475 career home runs prior to retiring after the 1962 season.