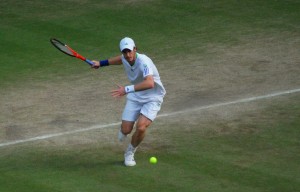 On Sunday, Andy Murray became the first man from Britain to win the men’s Wimbledon singles title in 77 years. In the final, he took apart Novak Djokovic the No. 1 player in the world.

He won the U.S. Open last year as well and a gold medal at the London Olympics.

However, the Scot still is the No. 2 ranked player in the world in the latest ATP rankings.

The day after his victory Murray said he was much more interested in winning more Grand Slam tournaments that he was in reaching the No. 1 player plateau.

Murray has reached the final of the past four majors he has played in and has won two of them.

When asked on Monday about moving into the No. 1 spot Murray shrugged and said it is hard to believe he won two of the past four grand slam titles, the Olympic Gold Medal and still he is far from being the No. 1 player in the rankings.

He said it could be that he needed to be more consistent when it came to other events during the year.

He also is aware that he did not participate in the French Open this year due to an injured back and that did not help with his ranking.

However, he said he would rather not reach No. 1 and win additional titles in the Grand Slam events, than never win any more Grand Slam title but be No. 1.

One Grand Slam remains this year and the U.S. Open will be played in September in New York as it always is. Each of the previous three Grand Slams this season have been won by different men. Djokovic won the Australian, Rafael Nadal the French and now Murray has won Wimbledon.

Stealth Trading Down 5.4% This Week