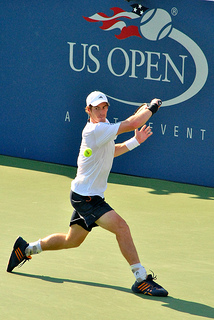 Scotland’s Andy Murray defeated Serbia’s Novak Djokovic to win the U.S. Open Tennis Championship on Monday in front of a capacity crowd in New York City. Murray was cheered on by fellow countryman and Hollywood star Sean Connery, as well as another countryman Alex Ferguson the manager of the world’s richest sports team Manchester United.

The 25-year won the match that lasted nearly five hours in five grueling sets. Murray jumped out of the gate fast and took the first two sets 7-6 and 7-5. Djokovic battled back and won the next two sets in dominating fashion 6-2 and 6-3. However, in the first game of the fifth and final set, Murray was able to break Djokovic’s serve to take the lead and never look back. He won the fifth and deciding set 6-2.

One British newspaper hailed the win by writing on their website – “Yankee Doodle Andy.” Others mentioned how important his win was for Britain, while David Cameron, the British Prime Minister said in a tweet that Murray’s win capped off an incredible summer of sport for everyone in the United Kingdom. Murray won the gold medal at the London Olympic Games in August for Great Britain.

Murray’s victory came only two months after the most disappointing defeat of his short career. Murray lost in front of British fans in the Wimbledon final in July against Roger Federer. However, with his win he breaks the three-year stranglehold that Djokovic, Federer and Spain’s Rafael Nadal have had in Grand Slam events.

The win assured that Murray would remain the no. 3 player in the world. He collected a winner’s check for $1.9 million.