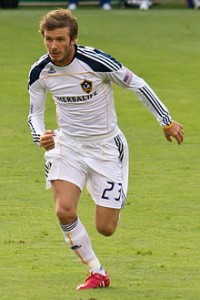 On Monday, David Beckham told reporters he would play his last game in a Los Angeles Galaxy uniform on Dec.1 when his club faces the Houston Dynamo in the Cup final for Major League Soccer. However, Beckham insisted his playing days are still not over, but just coming to an end in Los Angeles.

The former captain of the England National team has been linked to many clubs in South American, Europe and Australia. His agents are now looking to sign another deal that will be his next challenge.

Beckham wants to be involved somehow, including possible expansion team ownership, in the MLS. Beckham’s impact on the league has been huge since he joined the club after leaving Real Madrid five years ago. In his time with the club, Beckham has appeared in three times in Cup finals for LA and won one.

Beckham has insisted the rumor that he wanted to finish his playing career in Australia was not true. Nevertheless, many franchises in the A-League have high hopes the former English captain will play for them. However, he has been linked to at least one club in Scotland, Brazil and a host of others throughout Europe.

Tim Leiweke, the Los Angeles Galaxy owners representative said it did not happen very often that just one player is able to redefine a sport, but David Beckham did by taking not only the LA franchise to another level, but the entire sport of soccer in the U.S. was taken to another level.