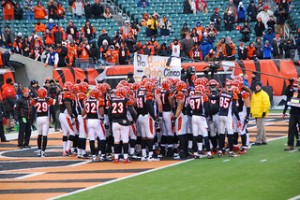 Nate Webster a former linebacker with the Cincinnati Bengals was convicted of sex-related crimes on Wednesday involving the daughter of an ex-Cincinnati Bengal assistant coach. The Cincinnati jury declared Webster guilty on four counts of illegal sexual conduct involving a minor. He was found not guilty by the jury of three additional charges: sexual battery, sexual imposition and another count of illegal sexual conduct involving a minor. It took the jury six hours to deliberate before announcing its verdict.

Webster was accused by prosecutors of having sexual relations with the teenage girl back in 2009, at a time when the teenager was only 15. He is alleged to have threatened her with harm if she said anything to anyone about the incident. Webster said he had sex with her the following year, but at that time she had turned 16, which is Ohio’s age of consent. However, he denies that sexual relations with the girl started prior to her turning 16.

Webster’s lawyers said they were disappointed in the jury’s verdict and would appeal following his sentencing. They said they could not discuss any specifics regarding the appeal. The attorneys for Webster said the teenage girl lied about being 15 at the time the first sexual relations took place. Prosecutors said Webster admitted to having sex when the girl was just 15, but his lawyers argued that Webster was mistaken about the dates.

The office of the prosecution said Webster could receive a sentence of 20 years. If he had been found guilty of all the charges, he could have faced more than 36 years behind bars. Webster was an NFL player for Tampa Bay, Cincinnati and Denver in his eight seasons in the league.

Next »
Watson to Acquire Actavis