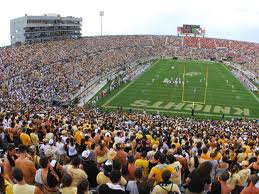 The Infractions Committee of the NCAA has banned from postseason play the University of Central Florida. The ban is for one season in men’s basketball and football because of major violations that took place in both sports. In April, Central Florida appeared in front of the committee for infractions. It also received a fine of $50,000 and received five years of probation. The university was also cited for not having enough institutional control.

The issue that brought about the ban had to do with Ken Caldwell’s relationship with the university. Caldwell, a Chicago man has links to a sports agency and helped steer many prospects to the university. Donnie Jones, the basketball coach for the men’s team was charged with not monitoring compliance. Jones was already suspended with no pay for three of the team’s conference games. The report from the NCAA noted that a head coach does not have to investigate any wrongdoing, but the NCAA expected the coach to recognize something that is a potential violation of NCAA rules, address the issue and then report them to the school’s athletic administration.

The University was proactive by self-imposing its own sanctions that included eliminating all wins for basketball for the last three seasons for the men’s team. It also cut scholarships for both men’s basketball and football. The school also reduced the amount of days for recruiting evaluation for both football and men’s basketball.