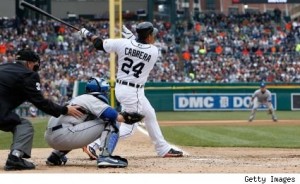 On Wednesday night, Detroit Tigers’ Miguel Cabrera joined a fraternity of baseball players that is very exclusive. He captured the Triple Crown for the first time since Carl Yastrzemski won the elusive title in 1967. His stats for the TC were a .330 batting average, 44 home runs and 139 RBIs. HIs season was one of the best played in baseball in the last decade.

Cabrera said he was very grateful for the accolades and attention, but more importantly, his team was in the midst of a run for the World Series. Even though Cabrera captured the elusive TC title, debate continued as to who would be named the MVP. Rookie sensation Mike Trout of the Los Angeles Angels had a spectacular season.

Winning the TC is not a guarantee of winning the MVP award. Since 1933 when the Baseball Writers Association started voting on the MVP, four of 10 winners of the Triple Crown did not win the MVP the same year as their TC win.

Cabrera will continue playing as he helped lead his team to the AL Central division title. Trout and his Angels’ teammates missed the playoff by four games. Trout has great speed and impeccable defensive skills, while Cabrera has better power and run producing skills. Trout said that Cabrera was the league’s best overall hitter and was incredible when he had two strikes on him.

The vote for the MVP will be announced during the upcoming playoffs. Cabrera said he could not worry about the vote since he had to help his team try to win a World Series title.