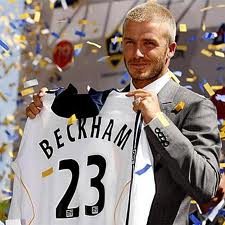 In 2007, former English captain David Beckham signed a contract to play for Major League Soccer’s Los Angeles Galaxy. Since then he has helped sell jerseys for the team, helped them to titles and most importantly sold the league and the sport of soccer to everyone in the U.S.

Upon his arrival Beckham told everyone that soccer was the world’s most popular sport everyone else but in the U.S. He told listeners at that time that he wanted to change that and make the sport much more popular in the U.S. In 2006, when in debuted in the MLS was still trying to forge a way into the mainstream sports picture in the U.S.

Now in 2012, Beckham is closing out his career as a player at Galaxy in today’s MLS Cup against the Houston Dynamo. He will be leaving a big footprint on the sport and the league when he leaves the pitch for the last time on Saturday.

Sustained growth has been brought to the league thanks to him with 7 new teams on board and 10 new soccer specific stadiums since he started in 2006. Players are earning higher salaries and television cameras from around the world can be seen at games throughout the league. The fan base for the league has grown so much that the average crowd’s size has surpassed both the NHL and the NBA.

Dan Garber the MLS Commissioner said that no one has transcended the sport like Beckham and no other player has done as much for soccer in the U.S.

Beckham is returning to England where he will weigh offers to play. He has drawn interest from teams in at least five different European leagues. He also is considering purchasing a MLS franchise.