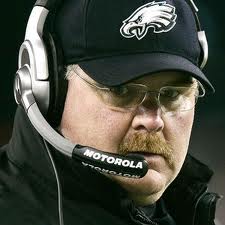 The oldest son of Andy Reid, the head coach of the NFL Philadelphia Eagles, was found dead early Sunday morning. Garret Reid was 29 and was found in his dormitory room at Lehigh University, where the Eagles are holding training camp. Campus police said he was found at 7:20 am.

Both coaches and players gathered to hold a group prayer prior to the beginning of practice. Following that, the general manager of the Eagles and the chief of police of the University addressed reporters. The GM said that Garrett had grown up around the team and that everyone in the Eagles organization is speechless and their hearts go out to Andy, his wife Tammy, Spencer, Britt, Joanne and Cosby.

Garrett Reid had apparently been drug free since 2007, following his arrest on weapons and drug charges and was working with the Eagles’ conditioning and strength staff.

Police found Garrett Reid unresponsive and attempts to revive him were unsuccessful said the police chief. Police said there were no suspicious activities related to his death. The coroner will carry out a complete investigation including an autopsy.

Philadelphia’s owner Jeffrey Lurie was informed of the death. Eagle officials said that Reid has been the head coach for many seasons and has been strong for the team the entire time and now the organization was going to be strong for him.

Fans started sending out tweets about the death saying how shocked and surprised they were when they heard the tragic news. Team officials announced that assistant coaches Juan Castillo and Marty Mornhinweg would take over the coaching responsibilities while Reid was away from the team.