Raven-Symone says her Sexual Orientation is her own 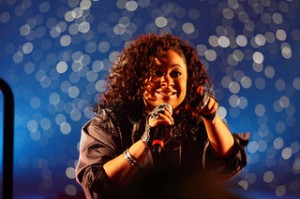 Actress Raven-Symone has never been one to talk much about her private life and said she will not be doing so anytime in the near future. The National Enquirer claims the actress is living currently in New York in a condominium with her girlfriend AzMarie Livingston, who is one of the contestants vying to win America’s Next Top Model.

Symone did not comment directly on the latest National Enquirer report, but she did address rumors about her sexual orientation on Tweeter.

She tweeted, “I live my personal life in the way that makes me the happiest. I have never been one in all my 25 years to disclose the name of whom I am dating, and I will not start doing that now. My sexual orientation is no one else’s but mine and the person I am with at the time. My life is not for public display.”

She added, “It is my right, like that of everyone else to be gay or straight. To tell people or to not tell anyone is my choice, as long as what I do does not bring harm to others.”

She also said her career is the only thing that is open for public display. Symone has been private about her private life for many years. She has said through certain comments that a man is not necessary in her life.

She said her perfect man at this point in her life would be in the form of a mannequin that would only come to life when she needed him.