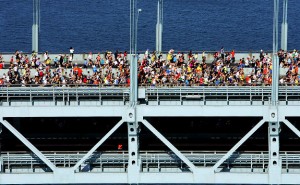 On Sunday, the New York City Marathon will be held with the weather expected to be partly cloudy.

A huge contingent of security that is unprecedented at the event will be on hand to give protection to the 45,000 plus runners that hope to traverse the 26.2-mile course that runs through the five boroughs of the Big Apple.

Scuba divers from the police department have secured each of the bridges that will be used in the race, while boats from the harbor police will escort the ferries that bring runners over to the starting line on Staten Island.

Helicopters will be hovering close by watching for any sign of disturbances, while specially trained law enforcement officers with trained dogs for bomb sniffing will be station at different areas along the entire route.

In addition, there will be thousands of surveillance cameras with cutting edge technology, among them are dozens installed just for the marathon, along with other cameras from the private sector that are in place and have been drafted by the NYPD.

Runners are to be screened prior to being allowed to take their position to start the race. Anyone who enters the starting zone in Staten Island or the finishing around in Central Park in Manhattan will also be screened.

People who have been given special access to areas that are secure such as the volunteers and race organizers will be pre-screened as well as required to go through a physical screening prior to the race, said a spokesperson for the NYPD.

Marathon participants, their families as well as marchers were told they could not wear vests or bring an array of different items including backpacks or canteens that are backpack style.

The organizers of the race, the New York Road Runners said they would provide plenty of clear bags as well as thousands of extra bottles for water.

The race organizers’ chief executive spoke about the unprecedented security by saying it will be the new normal following what happened in April in Boston.

According to New York Police Commissioner Ray Kelly there have been no specific threats made for the race.

Militants however have threatened revenge for the airstrike on Friday that a U.S. drone carried out that killed Hakimullah Mehsud a leader in the Pakistani Taliban.